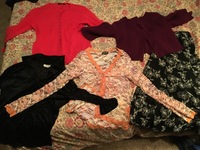 Some of my booty.

While visiting my friend over Thanksgiving break, she opened her closet and began shedding many years of clothes that she no longer wanted. It was like visiting a secondhand shop where I know I like all the styles, and one where I could get whatever I want and not spend a dime. I had my choice of cashmere sweaters in a wide variety of colors and styles. Any of them would add a shock of color to the single drawer that holds my sweaters in a limited palette of gray, brown, black and deep green. And, there were the dresses in colors and patterns way beyond my comfort zone. But, they were all beautiful, and many fit me. 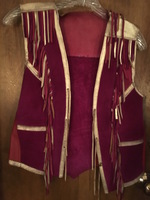 These moments will serve as memories that I will associate with my haul. I watched my friend parting with years of clothes, some worn a lot, and some not at all. Her personal backdrop was part of the narrative; she kept a few of the shirts her ex wore when performing with his rock band, sharing her memories of times when they were worn. A permanent item in my friend’s wardrobe is the groovy fringed maroon and gold leather vest that her mother made in the 1960s. I did not know her mom, she passed away not long after Darya and I first became friends, but I felt a connection to her in the style, colors and craftsmanship of the vest. For my friend, these keepers embody memories of times spent with people no longer in her life. 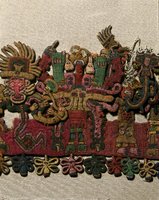 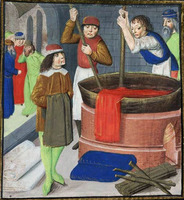 I became fascinated with colorful garments with so much of them now in my wardrobe.  It is common knowledge that colors trigger emotions and that certain colors are symbolic. After fiber, color is the next design element of any garment, and dyeing can be done before the decision to weave or knit is made. We know from artifacts that dyes existed for thousands of years, and that some of those dyes produced colors that remain astonishingly vivid today, as in the 2000 year old Paracas textile shown here. We have evidence of robust dying industries in ancient civilizations, as the one discovered during excavation at the site of Tell Beit Misrim (Boucher 54).

Dyes to produce colors were made solely from natural materials until 1856.  In 1857, a young chemist in England unexpectedly formulated the first synthetic dye while a student of organic chemistry. The notable quality of this new chemical compound was its ability to fix color to silk and wool. The young man, William Perkins, took advantage of this happy accident by aiming his science inquiry towards coloring fibers and weaves, thereby giving rise to the industry in synthetic dyes. The first destination for Tyrian purple, the color name used for marketing to trade, was the largest silk industry in London (Travis 51).  Science, economics, and fashion converged to bring synthetic color to the masses.

It was color that drew me to the silk T-shaped kimono style dress: rust, brown, and muted blues- favorites of mine. Once I tried on the dress, I noted the influence of different cultures and eras not only in the silhouette, but in the patterns and fabric textures: the bodice a flower patterned satin, the skirt and V-neck  a paisley crinkle chiffon. My friend bought the dress in a secondhand shop and never wore it, the tag still attached. This dress as a contemporary artifact is less interesting than the rich history of the inspiration behind the individual elements that the designer incorporated. 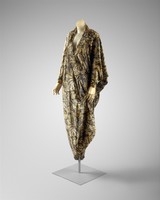 The kimono silhouette is the quintessential T-shape. The elemental design of the kimono is a result of efficient cut and construction, ideal as a canvas for lush colors, patterns and other artistic embellishments (Dalby 18). The kimono has the lofty distinction of being an emblem of Japanese material culture. Within Japan, there is a history of cultural relevance going back several hundred years, yet the basic shape of the kimono was seen as early as the 200 B.C. to 200 A.D. in China, around the the time of the Han Dynasty. The kimono shape may have made it to Japan in the fourth century, when there was increasing contact between the tribes of Japan and the civilized on the continent.The civilized culture of China was an aspiration for those who sought the influence the realm held (Dalby 25).

In the mid 1800s to the early 1900s, national identities in the form of artifacts, customs, and dress were on display at international expositions in the West, and the budding fashion industry found inspiration in the sartorial displays (Wilson). The simplicity, elegance, and sophistication of the kimono inspired Western adaptations from Paul Poiret and other fashion designers of the time. Modernist literature included descriptions of characters wearing kimonos in different settings (Carver).  While people in Europe and the Americas were adopting and adapting dress from the East, Japanese were casting aside their customary habit and adapting a Western style of dress (Dalby).  Around this time, between WWI and WWII, the kimono inspired new uses. Japanese artists found the broad canvas of the kimono an ideal place to paint political messages (Perkins).

I return to my dress and its other characteristics. The two distinct patterns in different silk weaves have a similar color palette: rusts, brown, and blues. The flower pattern on the satin bodice is timeless as design motifs go.  The paisley pattern, on the skirt is inspired by the boteh, or flower, but it less identifiable. It is a motif that Kashmir artisans morphed over time and used in the design of the sumptuous shawls woven there. By the early to mid 1800s the now familiar elongated oval that narrows and curves at one end took shape and the motif itself began to represent Kashmir shawls (Karpinski). Soon these shawls were mass produced in other parts of the world. Paisley, Scotland, with its existing textile industry now using Jacquard looms proved to be where the shawls were made most economically (Andrews), and where the pattern was named. 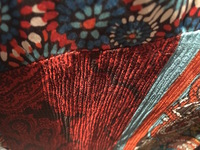 There are different methods for producing patterns of any kind. They can be embroidered on top of the fabric, woven in using different colored fibers, or printed on the fabric by way of print processing. The techniques for printing color patterns on fabric are direct, discharge and resist. Direct printing is applying the pattern with a formula of colored dye. With discharge printing, the fabric is dyed in full and a chemical is used to remove color to form the pattern. Resist printing involves imprinting a resist paste in the form of the pattern and then dying the fabric (Textile Exchange). While the methods for producing patterns remain the same, technology has served to mechanize them. 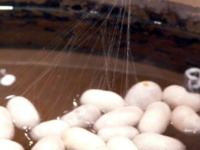 The fiber used to make my dress, silk, is the end product made from the filament silkworms secrete to make their cocoon. The discovery that this filament can be used to produce luxurious textiles was made in China as early as the mid-third millennium B.C.E. (Salusso). My dress is made of fabrics woven with two distinct techniques. The bodice is in the drapey satin weave. A satin finish is accomplished by weaving the bulk of the warp or the weft threads on the surface.The skirt and the V-neck are a pleated, or crinkle, chiffon.  Chiffon, a fine crepe, is woven with thin threads that are twisted. When releasing the loom's tension, these threads attempt to unwind and produce a bumpy surface. 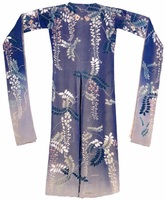 " We modify the dress of others to parallel that of our own culture."
- Verity Wilson

The kimono silhouette that we see today is quite different from the classic kimono. My contemporary western kimono style dress is fitted at the bodice and has an empire waist. It is a hybrid, like many styles today. Influences come from a variety of places and ultimately, we impart our own identity.  Verity Wilson describes how Edith Wilson had a gift of a kimono given to her by the Japanese Silk Growers' Association refashioned to suit her western style (Wilson 426).

I wear my dress over a long sleeve T-shirt, tights and boots, all in brown. Others who own this dress add their own flair.

Another layer to the story of my dress is that it was acquired by my friend secondhand. She has a number of clothes in her give-a-ways that will be moving on to at least their third life.  With the clothes that I took out of the way, my friend divided the remaining pile in two. The stylish clothes that may be in demand will be sold  through online secondhand market venues like Poshmark and ThredUp, and others will be given away to non-profit organizations that raise funds by selling clothes in thrift shops and to merchants in the international used clothing trade. Many items will wind up in other countries where there are large markets for used clothing. Pietra Rivoli lists the countries by rank of these imports in her book, Travels of a T-Shirt (184). Planet Money explores one of the markets in their Podcast (Warner, Ketsenbaum).

Rivoli, Pietra., 2005. The Travels of a T-Shirt in the Global Economy: An Economist Examines the Markets, Power and Politics of the World Trade. Hoboken, NJ: John Wiley & Sons.